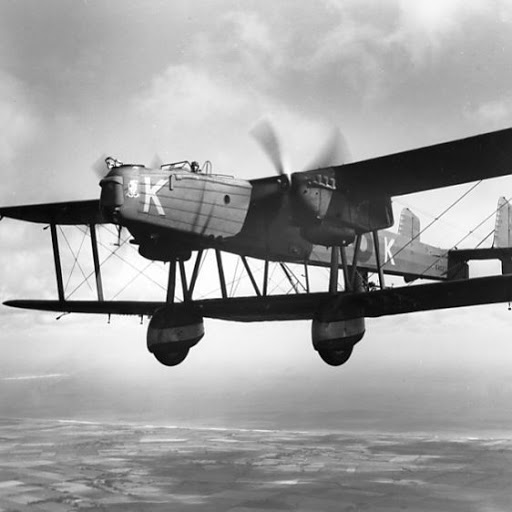 Although it was never to see battle, the Handley Page Heyford, the mainstay of the Royal Air Force’s bomber squadrons of the mid 1930s, will forever remain famous for being the first aircraft in history to be detected by the means of reflected radio waves.

To accompany my post about the Birth of Radar, here is a brief look at the history of an aircraft that played a vital, but often overlooked part in the defence of Britain.

The Heyford is most notably the last biplane heavy Bomber operated by the RAF. It was also the last of a long series of heavy bombers built by Handley Page going all the way back to 1915 with the 0/100 and the 0/400 in 1918.

The Heyford could be considered the ultimate RAF biplane bomber. Designed by Handley Page’s lead designer G. R. Volkert, it was built to meet the requirements of Air Ministry specification B.19/27, which called for a twin-engined heavy night bomber, capable of carrying a bomb load of 1500lbs over 900 miles at a speed of 115mph.

It differed largely from the design of it’s predecessors. The fuselage was attached to the upper wing instead of the lower as was the norm with biplanes. This allowed for a large bomb bay to be built into the lower wing and much improved visibility for the pilot and air gunners. It also improved the defensive field of fire and made it possible to fit a retractable ‘dustbin’ turret under the rear fuselage. Due to the high position of the engines, the aircraft could also be rearmed and refuelled quickly whilst they were still running – in fact the refuelling points were fitted into the large wheel spats. 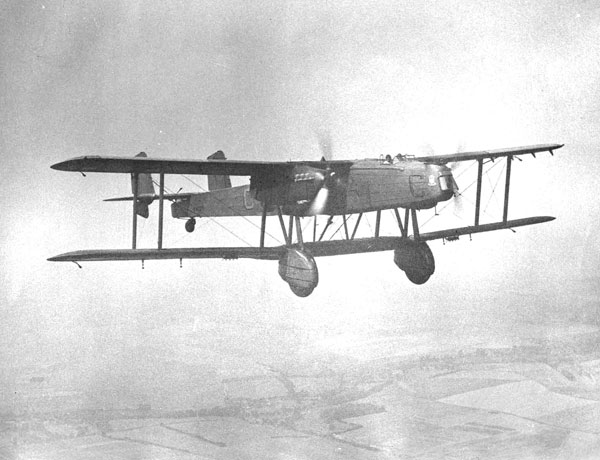 The construction was a mix of old and new, with a stressed skin metal forward fuselage and a fabric covered metal frame for the rear fuselage and wings. The wings had an impressive span of 74ft and aside from the central bomb bay, additional bomb racks were fitted outboard of the main undercarriage. The fuselage was quite roomy inside, with an enclosed radio room behind the pilot and lots of space for the aircrew to clamber about. The crew consisted of a pilot, a bomb aimer/navigator/gunner, a radio operator/gunner and a rear gunner. It was powered by twin 525hp Rolls-Royce Kestrel II engines – forerunner of the famous Merlin – driving two bladed wooden propellers.

The prototype, the HP.38 first flew in June 1930 and was successful enough to receive a production order for an improved aircraft, the Heyford mk.I in 1932. Improvements included a strengthened main undercarriage and more powerful 575hp Kestrel III engines. The first mk.I flew in June 1933 and took part in the Hendon Air Show – where being rather sturdy and agile in flight, it was looped in front of the crowds!

It entered service in November 1933 with number 9 Squadron, based rather appropriately at RAF Upper Heyford in Oxfordshire. In all the 125 aircraft built were to equip a further 10 squadrons and it became an important type in the rapidly expanding RAF and was the backbone of Bomber Command in the mid 1930s. The aircraft proved to be very popular and was well liked by its crews, it was easy to maintain and dependable in flight.

The Heyford Squadrons flew many long range night exercises, including mock attacks against targets in France and other parts of Europe, tragedy striking one such mission where a flight of seven aircraft from 102 Squadron were caught in freezing ice and fog on their return to RAF Finningley in Yorkshire. Four aircraft crashed and two were forced to make emergency landings, resulting the deaths of 3 crew with 3 further injured.

Over the course of its relatively short front line service life, the aircraft went though a number of improvements, it was fitted with larger supercharged engines, four bladed propellers and other minor improvements. The definitive and most numerous variant was the mk.III of which 70 were built.

In 1935 the Heyford began its association with the development of Radar, being the first aircraft to be detected by the use of radio (see my post about that here). Following this in the autumn of 1936 and the spring of 1937, the Heyford carried out what was probably its most important work of its service – it was used as the trails aircraft in the development of ‘air to air’ and ‘air to surface’ radio detection. It was the perfect choice for this work, it was large enough to carry the receiving antenna between its undercarriage and had enough space in the fuselage for all the equipment and its associated batteries. Also, due to its modern Rolls-Royce Kestrel engines, it did not produce the same levels of electrical interference as other older types and thus didn’t damage the trials. In 1936 it became the worlds first aircraft to detect another in flight by the means of radar, along with the first to detect a surface ship in 1937. 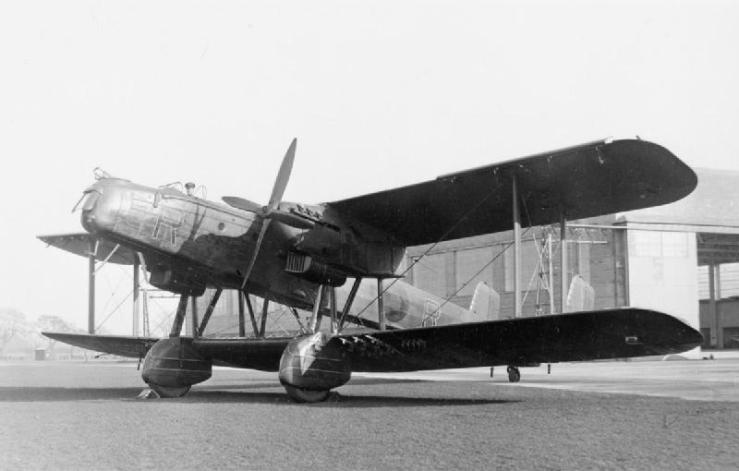 They Heyford started to be slowly removed from service in 1937 as newer, more modern types became available, until its final retirement from front line duties on the 2nd of  September 1939, the day before Britain declared war on Germany. Its final swansong really occurred during the Munich Crisis, when Bomber command brought the whole fleet alert, complete with full bomb loads and armament. What the fate of these slow lumbering aircraft and their crews would have been if they had been called into duty against Germany’s modern fighter force doesn’t bear thinking about!

After retirement, the remaining 40 soldiered on in reserve roles, performing various duties such as bombing and gunnery training and even various trials work – most notably acting as gliding tugs for the prototype Hotspur assault glider and early work on air to air refuelling.

The type was officially declared obsolete in July 1941, but there was at least one aircraft still working on trials at RAF Cardington in August 1944 – 11 years after it entered service. Alas there are no surviving examples left today, despite rumours of dumped examples near RAF Cosford, which sadly have never been found.

I hope this post serves as worthy tribute to a mostly forgotten but none the less important aircraft and to its crews.

7 thoughts on “Aviation History: The Handley Page Heyford Bomber – The Last and the First”